Traditionally a date of 1482 had been ascribed to this house, which probably refers to a rebuilding of the fireplaces and chimneys of the parlour adjacent to the refectory during the monastic period. Bishop Beckynton (1443 -65) is known to have built a new dormitory for the monks and it is possible that other rebuilding, of which we have no documentation, was carried out a little later, becoming the source of this well established tradition.

Henry VIII, in 1539, dissolved the monasteries and dispersed their lands. The Bath Abbey precinct came into the hands of the Colthurst family, but in 1612. Henry Colthurst sold this quarter of the city to wealthy John Hall of Bradford on Avon. George Parker, a carpenter, was granted a building lease by John Hall in 1622. He built the present timber framed house on the substantial remains of the south side of the former abbey. 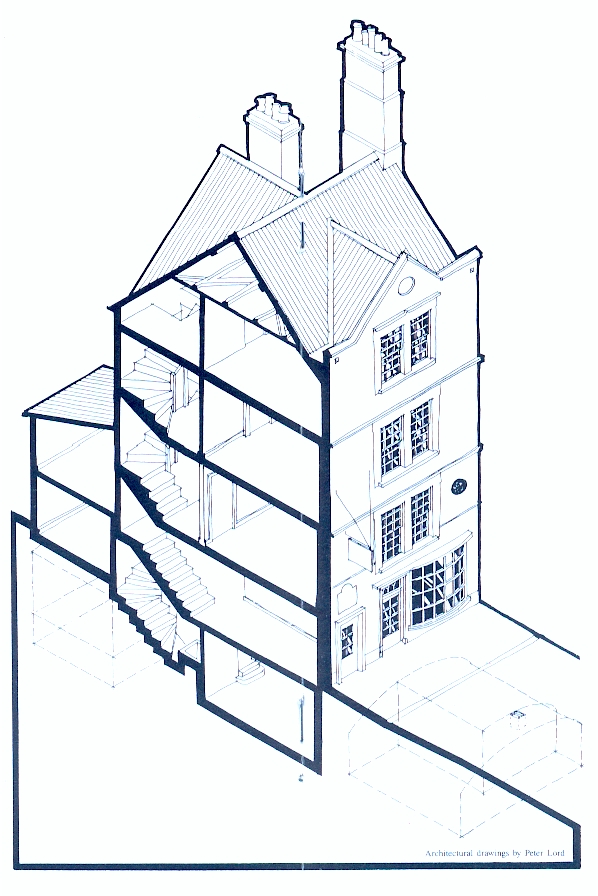 The timber for it was most probably sawn in sawclose, then a timber yard in the northeast corner of the walled city, where he rented a plot from the city council. George Parker was clearly a fine craftsman, whose work has stood the test of time. The faggot oven and old downhearth were incorporated in the ground floor of the building. Food would nave been cooked here in the open hearth with a wood burning fire. Other rooms in the house have decorative fireplaces in the Tudor style still popular in the 1600s.

Sally Lunn’s House is a unique reminder of pre-Georgian Bath. It is powerfully evocative of the atmosphere of the ancient walled city, illustrated by Gilmore’s fine map of 1694 showing Bath’s narrow alleys and gabled roofs. Sally Lunn’s is set in the narrow street long known as Lilliput Alley, before becoming North Parade Passage. It was the city Beau Nash would have seen on his arrival in 1705. This was the start of the century that saw the old Bath swept away and replaced by the splendour of Georgian squares, terraces and crescents in the Palladian style favoured by John Wood. The house has not been greatly altered, but certain changes have been made since it was built. During the 1700s, the street level was raised, making the original ground floor into a cellar. A grand reception room was created on the new ground floor by replacing a dividing wall with an elegant Hanoverian arch. The oven and kitchen fireplaces were kiht}tchen fireplaces were modernized to burn coal.

In 1660 Charles II was restored as king and the somber dress and style of Cromwell gave way to a lighthearted and more joyous mood. Bath became a fashionable resort. In 1668 Samuel Pepys the famous diarist came to the city and enjoyed the mixed bathing. The merry Monarch Charles II paid a visit too and with this influx of the wealthy and fashionable, tradespeople Flourished. Legend has it that from her home in France, where the Protestant Huguenots were being cruelly persecuted, came young Sally Lunn to find employment with a baker who rented premises in Lilliput Alley.

She sold his wares in the street, but when her skill at baking Brioche was discovered she no doubt spent for more time in the bakery itself. Sally Lunn’s Buns were a tremendous success; others tried hard to copy them, but her skill with the rich, soft and delicate dough inspired customers specifically to request the Sally Lunn.